The charismatic tenor saxophonist and composer Jan Harbeck has put his name on several of Denmark’s best selling instrumental jazz records in recent years. The characteristic laid-back soulful ease of his three Stunt releases have enthused audiences. With deep roots in the Swing tradition, his personal touch refreshes and renews this music.

Jan Harbeck’s first release earned him several awards. The surprising dark horse award-winner of the magazine Jazz Special’s annual “Recording of the Year”, IN THE STILL OF THE NIGHT (Stunt, 2008), brushed all the advance favorites aside. The same year, he received the prestigious Bent Jædig Award and was nominated for “New Jazz Act of the Year” at the Danish Music Awards.

Harbeck’s evocative and outgoing Swing style earned him many friends, and his second album, COPENHAGEN NOCTURNE (Stunt, 2011) was also hailed as one of the year’s best jazz releases. Original, and oozing self-confidence, the album shows Jan digging even deeper into his music with a striking presence – whether playing standards or Harbeck originals. To Harbeck, it makes no difference who the composer is. His quest is to find the innermost core of each piece.

He is now one of the Danish sax players to be reckoned with. On VARIATIONS IN BLUE (Stunt CD & LP, 2014), he took yet a step upward along with his brother in spirit Walter Smith III on an album that has more fine qualities than space here allows us to list. Like Harbeck, Smith gives priority to absorption and musical presence rather than ego.

Now Harbeck has delved into other aspects of his talent. While still retaining his acoustic quartet, he has put together a new, funky band – Live Jive Jungle. This band emerged from an urge to play music based on hard-swinging drumbeats – like Gene Krupa in a Benny Goodman classic like Sing Sing Sing! These charming, riff-based compositions, beats and grooves, aim to get jazz audiences (back) on the dance floor. If you are among those who have experienced Live Jive Jungle’s extroverted and intense late-night shows at the Copenhagen jazz nightclub La Fontaine, you know that it is for real – and with a solid foundation in the great tenor tradition of jazz.

ELEVATE was recorded “live in the studio” by legendary Flemming Rasmussen, who helps the sound jump out of the speakers. As producer and sound engineer on early Metallica albums, he knows what he is doing! All music on the album is by Jan Harbeck, and the interplay with electric guitarist Thor Madsen, bass guitarist Jeppe Skovbakke and drummer Peter Leth sparks and ignites

On all digital platforms for streaming and download as well as in HD format. 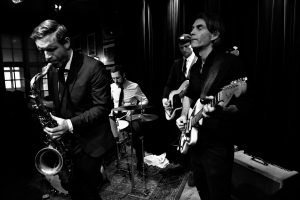 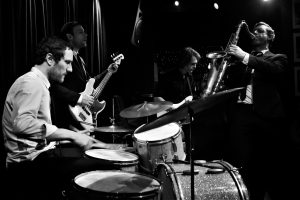